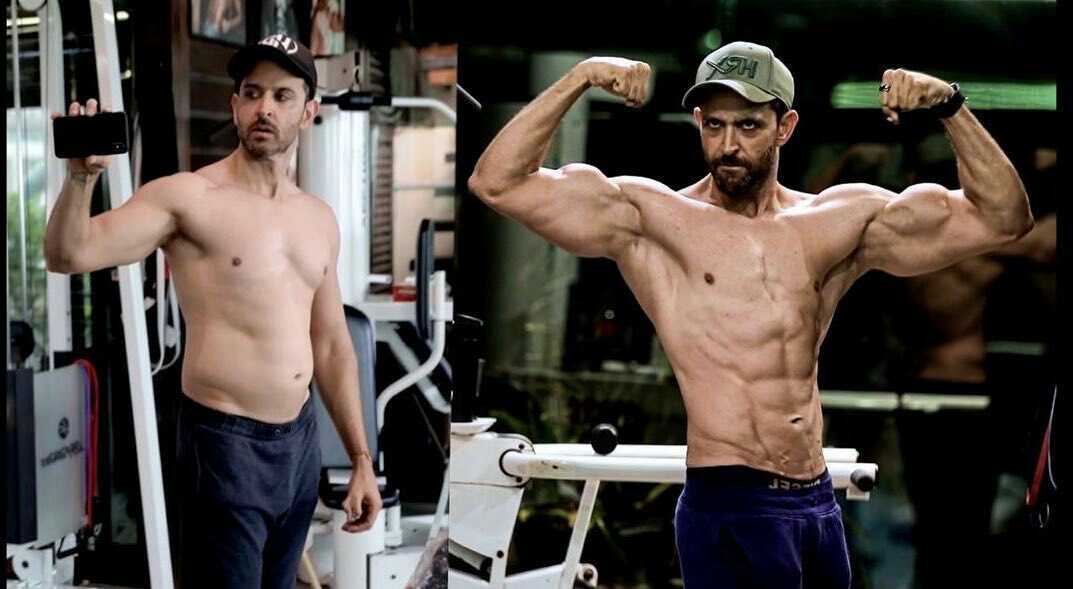 When it comes to transformation story, Bollywood A-Lister Hrithik Roshan’s Transformation story probably comes first in everyone’s mind. It was a shock to many how the veteran actor built his sculpture-like physique just in 2 months. Very few know the whole story how the Greek God of Bollywood, managed it in such a less time.

In this article, I would extensively break down Hrithik Roshan’s Transformation story. How Hrithik did that gigantic transformation form Super 30 to War. I hope this article will inspire and entertain you.

So make sure you read till the end.

The Backstory Behind Hrithik Roshan’s Transformation

Hrithik Roshan is a name almost everyone is familiar with. His dashing good looks, sculpture-like physique, and stunning personality are known not only in India but in Foreign countries as well. He has made his name based on pure talent and mesmerizing presence that is enough to make anyone drool.

Recently, Hrithik was included in the List of Top 10 Most Handsome Men’s List. So what led him to this massive transformation?

In 2019, Hrithik acted in a movie called Super 30. Although the movie was a critical and commercial success, the role of Anand Kumar required him to unfit himself. And thus he gained the extra weight.

His very next film was War. And this movie required him to play the role of a War Hardened RAW Agent Kabir. Hence it was time for Hrithik to go back to shape.

The Truth Behind this Massive Transformation

The very first thing that we need to look at is Hrithik’s body prior the War Training. Although he had gained a lot of extra weight but Hrithik was still a big guy. And as because his physique was good before Super 30, this feat was possible for him.

So know this, if you had a good body before you went unfit it’s possible to get back in shape fast.

But the thing that made Hrithik Roshan’s Transformation extraordinary is the challenges he faced.

The biggest challenge Hrithik faced during this transformation was his back problem. He had some spinal disk issues that made his training very difficult, and he was forced to take a different approach to train because of that.

This aspect made his transformation more challenging. He had to rediscover training from scratch and act on it. And the fact that he had only 2 months to achieve all this was insane.

You can read our article on Getting Six Pack Abs here.

Hrithik is a superstar for a reason. He made this unreal transformation that takes years just in two months. He had challenges, lots of them, but he overcome them with sheer will power and got himself fit for the part.

During the initial phase of this training, he was exhausted. The Super 30 movie required him to unfit his physique to the point that it ecame very difficult for him to regain it back.

But he didn’t lose hope and kept striving until he made it. He gave all he had.

The After Math of The Transformation Story

This was Hrithik Roshan’s Transformation story. Hrithik not only managed to achieve his goal but he did that in flying colors.

The War movie was released on 2 October 2020. It was a commercial blockbuster, and Hrithik got internationally recognized for his exceptional performance. You can watch the full Hrithik Roshan Transformation Video.

Hiyaa Guys, it's Preetam! I'm a Bengali YouTuber, entrepreneur, author, fitness enthusiast, digital marketer, and bibliophile. I have a channel on YouTube that goes by the name "The Desi Bong", so check that out if you can! View all posts by Preetam Chatterjee

One thought on “Hrithik Roshan’s Transformation: The 2 Month Wonder Story”