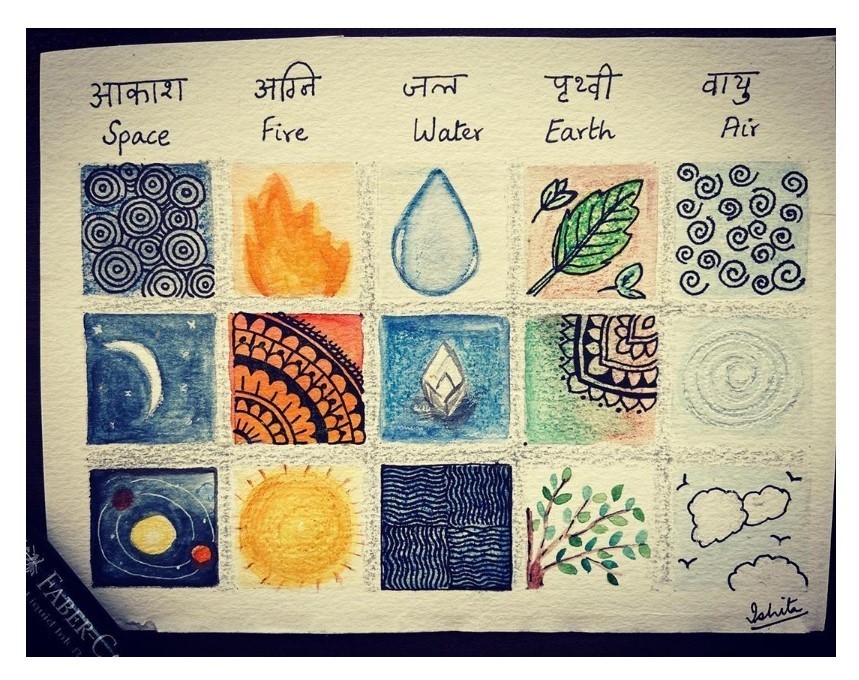 Pancha Bhoota or Pancha Maha-Bhoota, Indians are much familiar with these two terms. As we believe these 5 elements also exist in our inner body. Pancha Bhoota Aradhana – Revering the 5 elements. It happens once every Shivaratri, a day or two before New moon or Amavasya. It’s a very intense process and for those who have experienced it. The five great elements, also five physical elements, is a group of five basic elements, which, according to Hinduism, is the basis of all cosmic creation.

According to Hindi terms these five elements are known as Prithvi, पृथ्वी (Earth), Jal, जल (Water), Agni, अग्नि (Fire), Vayu, वायु (Air), Akash, आकाश (Space). Dravya is any substance that has any qualities and actions residing in it. Ayurveda being more practical oriented subjective science opines that based on the different functional and structural aspects of the universe and organisms, each and every cell, organ, organ systems. In general, every Dravya (substance) in the universe is made of Pancha Maha-Bhoota (5 atoms or proto elements).

Prithvi (earth proto element), and Tvacha is skin in English. According to Ayurveda and Yoga, Pancha Bhoota is associated with the overall health of human beings. Any disorder in the human body indicates an imbalance of one or more of these elements. The bones and the marrow in them, muscles, cartilages, and the skin are made up of the Earth Elements. Solar energy helps in the sustenance of life. The sunrays bind the cells and keep the skin, the outer cover, healthy, and ready to protect the inner organs. The skin secretes antibacterial substances, and tears and mucus contain an enzyme called lysozyme that breaks down the wall of bacteria. The hardness of bones is due to Prithvi Maha-Bhoota’s predominance. An Imbalance of Prithvi element in the body will cause these health problems:

Second Element: Agni or Fire is Related with Netra

Agni (fire proto element), and Netra is an eye in English. We all see the world with our eyes, and what’s happening around. It is not the inner or the subtle fire that usually remains unseen but it is the one that is felt deeply, mostly as heat and energy. Some say that the eyes are the most precious organs in our body. It may be a debatable point, but still, the importance of eyes cannot be denied. When suddenly an object approaches our eyes, the eyelids are closed in a reflex action. The temperature of one’s body, various digestive fluids is also due to the Agni Maha-Bhoota predominance. An Imbalance of Agni element in the body will cause these health problems:

Third Element: Akash or Space is Related with Karna

Akasha (space proto element), and Karna is ear in English. The hollowness of different organs like lungs, heart, etc is due to Akasha Maha-Bhoota predominance. The Pancha Maha-Bhoota Tatva are together accepted as life elements, and without space, there would have been no possibility of creation of life; hence space became the life element. The existence and growth of everything depends on the sky. Akash (sky) or space stands for dimension. Space was the first thing to be created and to come into being. So ear has a strong connection with Akash or space element. An Imbalance of Akash element will cause these health problems:

Fourth Element: Jal or Water is Related with Jiuva

Jal (water proto element), and Jiuva is tongue in English. We taste everything with our tongue, without tongue you can’t taste any food. The unctuousness in our body, all fluids is due to Jal Mahabhoota predominance. We can go for a luxurious living and rich diet occasionally. It should not be a regular affair. If it becomes regular, then the elements in our body will lose balance, the body will become imbalanced and will no longer remain healthy. We have explored water yet do not know its true potential, it increases, decreases, and always remains substantial. Its availability, purity, and ability to sustain life counts most. An Imbalance of Jal element in the body will cause these health problems:

Fifth Element: Vayu or Air is Related with Nasika

Vayu (air proto element), and Nasika is the nose in english. The air’s purpose is to allow breathing by blowing in each part, to fill fully the vacuums created in a meteorologist’s chart.

They are situated inside the chest and are connected to the mouth and nose. Here, the blood gets a fresh supply of oxygen. Breathing involves two acts: inhalation, that is, breathing in and exhalation, or breathing out. Air is easily inhaled and exhaled through the nose, mouth, and windpipe. It gives the much-needed oxygen to purify and revitalize the blood and also helps in excreting out the waste in the form of air or gases. Various movements of enzymes to target cells, bodily movements are due to the Vayu Maha-Bhoota predominance. An Imbalance of Vayu element in the body will cause these health problems:

Subhranil is a Chef during the day and a Graphic Designer by night. He is also a Marketing Specialist, Investor and occasional Freelancer. All of this, a very busy schedule, and he has still been in shape at all times. You can find him on all mornings at the gym in his hometown Burnpur. View all posts by Subhranil

3 thoughts on “Pancha Bhoota: How 5 Elements is Related to Health”